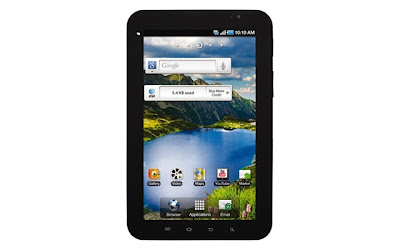 I am dying to own a lightweight (in operation and size) anytime/anywhere mobile computing device. I want more than a smart phone but less than a netbook (which we have both). What I want is a tablet.

Although I tend to pick on iSnobs (figure it out), I must admit I was blown away by the Apple iPad

. It is gorgeous. If your goal is to consume media, I don't know that there is a more capable device. But when I got one in my hands to tinker with, it is a beast. It is surprisingly heavy and only slightly more convenient than a small notebook computer. Don't get me wrong: I lust for one, but it does not fit my imagined perfect device for mobile computing.

Now there is the Samsung Galaxy Tab via AT&T (or any other carrier, they all have it). Wowee, now we're talking! About 3 times larger than a smart phone but still substantially smaller than the iPad it is the perfect size. The idea of being able to fully consume and create media and content anywhere at any time with a device that can fit in a coat pocket is my idea of perfection.

The specifications are similar to the iPad with a few pros and cons. One thing the Galaxy has that the iPad doesn’t have (yet) is two cameras, one facing the user and the other facing away. Why is this a big deal? With services like Skype, video messaging is as easy as pie these days. Imagine having a voice or video chat with somebody and having the ability to send them a video or image of what you are talking about at the same time! Tech help will never be the same!

Do I need a tablet? Probably not, but I absolutely want one. But as much as I cannot justify one as a need today, I have a feeling if I had one it wouldn’t take long to totally depend on it. My wife seems to scoff at them, but I will chip away at her and someday I will own one. Maybe if the stars line up it will happen sooner than later. If you own a Galaxy Tab

or an iPad I would love to hear about your experiences with them! Satisfy my itch!