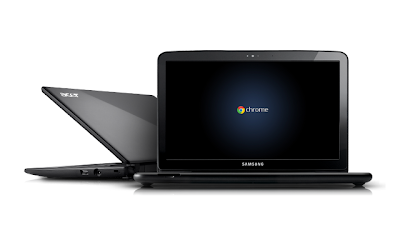 I am torn. I know I have written about my tablet dilemma in the past, but the water has been muddied even further. This past week Google released the Chromebook

. The Chromebook resembles the short lived Netbook, but that’s where the similarities end.

is tackling mobile computing from a different angle entirely. What Google has done is to make an ultra mobile device completely tailored to what most computing has evolved (devolved?) to: Internet browsing and media consumption. The Chromebook literally boots right into the Chrome browser (in just 8 seconds!!).

I must admit, if I am not using a PC to play a game or use any special hardware intensive applications, I am simply browsing the web or consuming media.

Another concept that most people need to wrap their minds around is the idea of cloud computing. If you do not already know, cloud computing is simply storing your data and files on managed servers, not locally on your device. The benefit is smaller, faster, and more streamlined devices as well as the ability to access your files at any time and on any device. Cloud computing is the future of computing.

From a technical perspective, Google has it nailed with the Chromebook, it is simply the next logical step based on what we actually use our computers for. Having said that, Google still has giant challenges in front of them. Although the concepts of the Chromebook make sense, the ideas of not saving your files locally and not using a traditional operating system will take some adjustment. It’s such a mindset change it may not ever gain acceptance with some people.

What to do? I think what I need is a Google Chrome tablet! Google are you reading this? I will predict it here first: Google tablet based on the Chromebook within the next 12 months. That’s what I will buy.