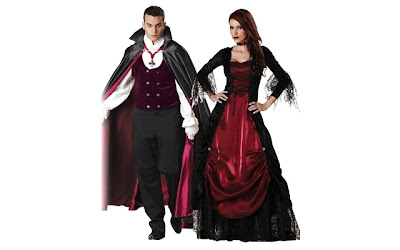 With the return of the iconic show Buffy the Vampire Slayer to television, the success of the current TV hit Vampire Diaries, and the much-anticipated release of The Twilight Saga:  Breaking Dawn this fall, the romance surrounding the idea of vampirism is greater than ever.  For this reason, the demand for vampire costumes may reach an all new high this Halloween.

Although not everyone envisions vampires to have one type of appearance, the most romantic version of the vampire image is a Gothic one.  If you are planning on browsing the couples costumes for your next costumed event, then forgo the traditional Romeo & Juliet and consider something like this Elite Adult Gothic Vampira Couple Costume and the matching Men's Vampire Costume.

What I like most about this pair of costumes, aside from red and black being one of my favorite color combinations, is that they are both edgy and romantic, without losing its sense of elegance, proving that such costumes can be sexy without being over-the-top.  Unfortunately for me, I think the next time my husband and I dress up as a couple, it may be as Han and Leia if he has his way.